Justin has been with Google for 11 years, including two years working on Google Video and YouTube. Prior to Google, he spent 5 years at the BBC (later Red Bee Media) working on operations for the BBCi interactive TV services. 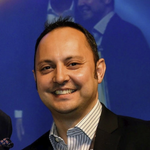