First Name
Richard
Last Name
Halton
Company
YouView
Job Title
chief executive
Speaker Bio
Richard is the CEO of YouView, the technology solution powering the UK's fastest growing TV platforms (BT TV and Talk Talk TV) and is in active use in nearly 3m UK homes. The business is a joint venture between BT and Talk Talk, the BBC, ITV, Channel 4, Channel Five and Arqiva.
The last two years have seen the re-engineering and re-design of YouView as a data driven Cloud based service deployed across multiple devices. We call this our ‘Next Generation’ platform. It has already won awards since launching in November 2016 and is considered capable of competing with Virgin and Sky Q by our major investors and a breakthrough in platform innovation by broadcasters.
Richard was responsible for forming the venture, developing and launching YouView as the UK's first seamlessly integrated linear and on demand TV service in 2012. The proposition now extends across set top boxes, smart TV’s (through a ground breaking partnership with Sony) and mobile services.
Before YouView, Richard led the BBC’s Corporate Strategy team where he was responsible for partner relationships and platform strategy. Prior to that he was a member of both the BBC Three launch team and the BBC One channel team; in 2003 he became Controller, TV Strategy and in 2005 he was asked by the Director General to lead Creative Future, a pan BBC review to position the organisation for the next phase of the digital age.
Before joining the BBC, Richard worked for Andersen Consulting (Accenture) in their retail practice. He graduated from the University of Warwick and lives in West London with his wife and three children and enjoys running (London Marathon 2017 being the latest challenge), theatre, film and music. 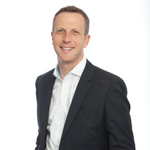