Richard has worked in the media industry since 1999. He has been involved in various technology development work during this time, primarily in digital cinema and is named on patents in the area of visual perception of 3D. He set up Sundog in 2013 and, along with colleague Christian Ralph, created the Sundog cloud platform, a scalable virtual post-production system used for broadcast and movie production. Richard has previously held positions as Head of Digital Cinema Operations at Technicolor and Director of Digital Cinema at Dolby Laboratories. Richard holds a BSc (Hons) in Media Technology and an honorary Doctor of Technology degree from Southampton Solent University. 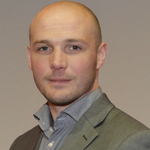